Golds gains over 100 dollars this month

With only one more trading day in the month of May, gold futures have precariously clung just below $1900 per ounce. Today gold futures basis the most active June 2021 contract traded to a high of $1906.50 and a low of $1890.80. With the first notice day occurring tomorrow there will be many who are long June gold either exiting the trade and taking profits, or rolling over to the next most active month which will be August 2021.

Gold pricing for the month of June had a spectacular price advance. At the beginning of the month gold futures opened at approximately $1771 and gained well over $100 per ounce with one trading day left for the month. The last time gold had such a strong monthly gain was in July with gold opening at approximately $1830, and settling at $2017 by the end of the month. Of course, the following month, August 2021, is when gold hit its all-time record high at $2088.

As of 5:35 PM Eastern standard Time the continuous contract of gold futures has now switched over to represent August 2021 pricing. Gold is currently fixed at $1899.40 after factoring in today’s decline of $4.40.

Although there was slight dollar weakness today, that weakness did not overcome fractional selling pressure coming from investors and traders. Currently spot or Forex gold is fixed at $1895.90. According to the Kitco Gold Index (KGX), today spot gold gave up $0.90 which can be broken down into a decline of $1.85 as a direct result of fractional selling pressure by traders with gains of $0.95 due to dollar weakness. The net result was that spot gold sold off by $0.90 on the day.

The dynamic events which have been the undertones to move gold pricing higher have been due to a number of factors. The massive amount of fiscal spending over the last two years to help the U.S. economy recover, as well as the extremely dovish monetary policy that is the current mandate of the Federal Reserve being the main reason. Recently a new element has been rising inflation as judged by the CPI. The last report stated that our current annual inflation rate has swelled to 4.2%.

However, Friday will contain even more important inflation numbers which are preferred inflation measures according to Carsten Fritsch, a commodities analyst at Commerzbank.
“On Friday, investors will get the important personal consumption expenditure deflator, the Federal Reserve’s “preferred inflation measure. Recently a number of Fed representatives …had hinted that a discussion about tapering is drawing ever closer. If the aforementioned data turn out to be robust, the debate could gather pace, strengthening the dollar and yields, and thus precluding any further rise in the gold price.”

On top of all of these extremely relevant issues is the fact that cryptocurrencies which were moving at such a fast and parabolic rate to new all-time highs are in a corrective period. That means that many traders have moved chunks of capital out of digital currencies and into the safe-haven asset gold.

Barron’s recently reported that “J.P. Morgan strategists have also found that investors have been shifting away from Bitcoin and moving back into gold over the past month, reversing a trend of the previous two quarters. The reasons for that aren’t clear, said the team of strategists led by Nikolaos Panigirtzoglou, in a May 18 note discussing gold and Bitcoin.”

Our technical studies indicate that if gold is able to close effectively above $1900 per ounce, the next level of major resistance is at $1965. 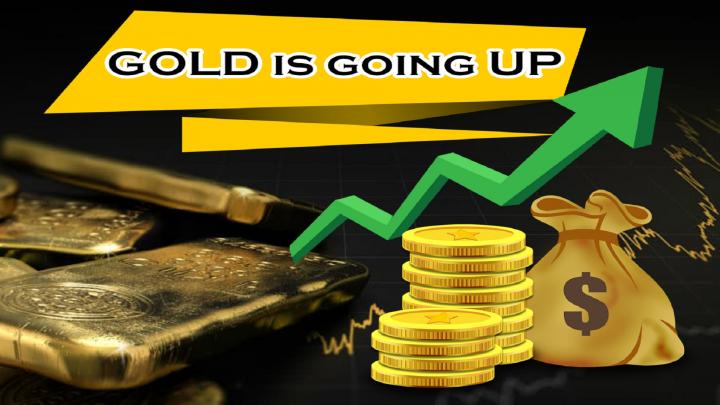