Inflation soars to 5% - a thirteen-year high

As many economists had forecasted a big uptick in inflationary pressures, on this occasion they got it right. Economists polled by Dow Jones and The Wall Street Journal predicted that we would see ½ a percent increase in the rise of inflation as monitored through the consumer price index (CPI). Unquestionably the costs of goods and services, which can be easily expressed is the cost of living is now at 5%, after a net gain of .06%, which is 1% above forecasts for this month’s report. This is the fourth consecutive month in which the consumer price index, i.e., inflation, grew.

The chart above labeled chart 1 looks at the inflation rate from 2008 to this most recent CPI report. It is most alarming that it is just below the inflation rate that occurred during the 2008 banking crisis, which resulted in the last major recession.

The real question that economists and the investment community is pondering is whether or not this recent surge in inflationary pressures is temporary or sticky. Obviously, the surge in costs for used cars most certainly will be a temporary event as manufacturers begin to ramp up microchip production and new facilities open up in the United States to make up for those formerly bought overseas.

As reported by MarketWatch, “The pandemic forced many companies to slash production and disrupted trade around the world as countries closed their borders to travel and instituted safety rules. With the economy reopening, businesses are scrambling to ratchet up production and obtain badly needed supplies from domestic and overseas suppliers—the result: widespread shortages that have raised prices and inflation. The reopening of the economy and end of coronavirus restrictions have also unleashed a storm of pent-up demand.

One of the largest increases occurred due to a supply-chain issue with microchips used to build automobiles. In fact, used car prices accounted for roughly 1/3 of the overall increase last month. However, Items such as the cost of food and energy could be either temporary or sustained. But the $64,000 question is how much inflation will decrease as the economy reopens because the majority of these price increases can be directly related to the effect the pandemic had on economies globally. Higher labor costs will certainly be a sustained area in which costs will continue to rise.

The safe-haven asset gold is very sensitive to the rate of inflation, and as such, gained value today following the release of last month’s CPI data. As of 6 PM EST gold futures basis, the most active August contract is currently fixed at $1901, which is a net gain of $4.60. Silver also showed respectable gains and is now once again trading over $28 per ounce.

As we get more information as to what inflationary pressures will be sustained over time and which goods or services will fall back into alignment with their former pricing structure, this will determine where inflation goes in the future.

For those who want more information, please use this link. 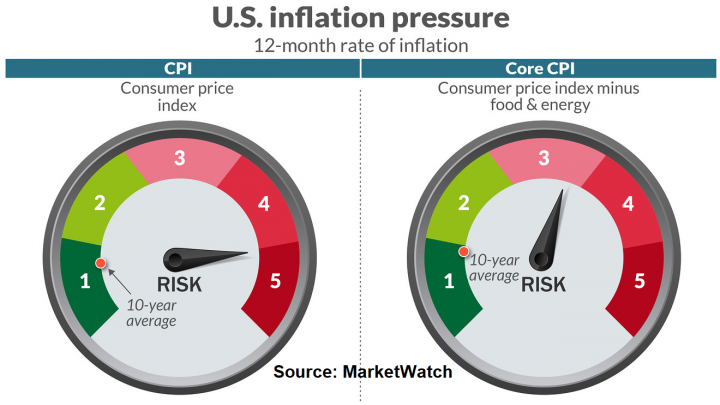