Today the BEA (Bureau of Economic Analysis) released the latest data on current inflationary levels vis-à-vis the PCE (personal consumption expenditure price index). The report revealed that inflation increased by 0.6% in January which is the largest yearly increase since 1982. January’s increase of 0.6% is an increase of 6.1% year over year. Recently the government CPI report (which includes energy and food) revealed that inflation spiked to 7.5%, also at the highest level since 1982.

To get a sense of how inflation has moved higher consider that in September the PCE index was 4.4% YOY, 5.1% YOY in October, 5.6% YOY in November, and 5.8% YOY in December. Since September 2021 the levels of inflation as represented by the Federal Reserve’s preferred PCE index have risen 1.7%.

Inflation is a double-edged sword affecting gold prices. Gold has been long considered a haven asset that protects investors from rising inflation. Concurrently, as inflation rises it puts more pressure on the Federal Reserve to raise interest rates, which have a negative or bearish impact on gold. 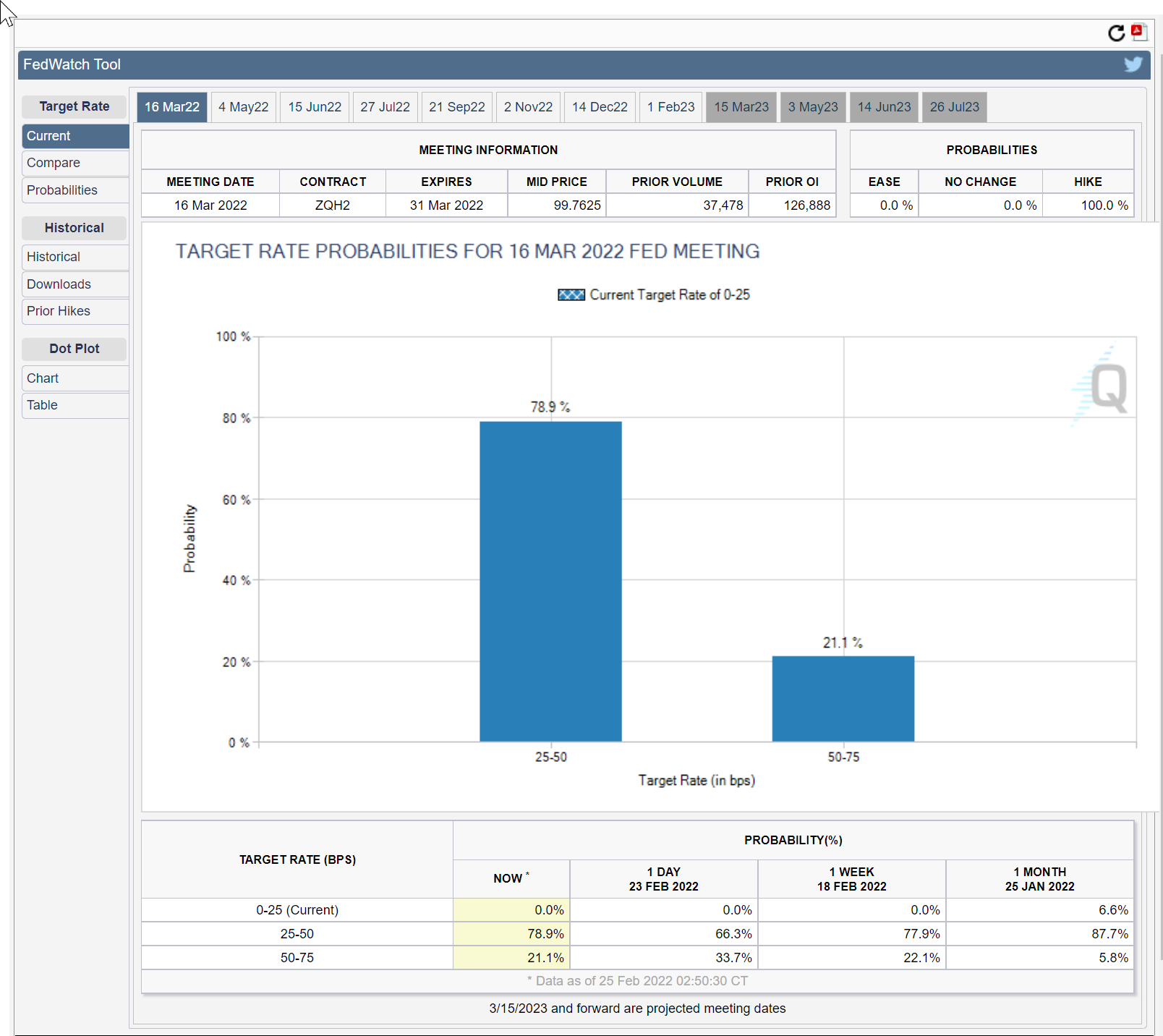 Inflationary pressures will likely continue to spiral higher as the Russian invasion of Ukraine continues. Russia produces roughly 10% of global oil production. Yesterday crude oil futures moved just above $100 per barrel before settling off of those highs just above $93 per barrel. Also there a high probability food costs continue to rise adding to inflation.

Investors continue to weigh in on what effect Thursday’s full-scale invasion by Russia into Ukraine will have on financial markets. Leading up to the invasion equities worldwide experienced dramatic drops with the expectation that such a move would have a dramatic impact resulting in an economic contraction. However, over the last two days, we have seen a respectable recovery in U.S. equities.

The European Union in unison with the United States and Canada began to place sanctions against Russia for their premeditated attack and invasion of Ukraine, a sovereign country. According to Bloomberg News, “Global condemnation of Vladimir Putin quickened, with the U.S. poised to apply personal sanctions on the Russian leader, as his troops pushed toward Ukraine’s capital and he urged its military to mutiny.” It has also been reported that the United States plans to sanction Vladimir Putin directly because of his orders to launch a full-scale invasion into Ukraine.

Multiple news sources have reported that Russian troops are quickly approaching the capital of Ukraine. However, most analysts as well as President Biden acknowledged that the sanctions will not have an immediate impact and could take months before they affect the Russian economy.

What is quite clear is that the likelihood of a diplomatic solution or a conclusion to the current military actions will not unfold quickly. The Russian Ukraine war could spiral into major destruction, hardship, and death of the Ukrainian people. Putin has proclaimed that Russian military action will not end until the Ukrainian military lays down their weapons and the political administration in Ukraine is toppled and replaced by politicians that are pro-Russian.

Gold’s price swings have been dramatic over the last two days. Yesterday gold traded to a high of $1976.50 before falling dramatically and settling at $1905, coupled with today’s $37 decline resulted in a decline of gold prices on the week.  Analysts have said that the pullback from Thursday highs was simply a round of technical profit-taking.

Analysts including myself believe that the recent price drop signals a further price decline in gold is jumping the gun. Daniel Briesemann an analyst at Commerzbank said it most eloquently, "We think the price drop is premature, there is a risk of further escalation in the conflict, and it could be just a temporary correction,"