As of 4:00 PM, EDT gold basis the most active June 2022 futures contract is currently just under $1900 at $1899.40. That is a net decline of $35 or 1.82%. The dramatic selloff in gold today did create significant chart damage with gold opening and closing below its simple 50-day moving average. Market technicians use the 50-day moving average to ascertain a stock or commodity’s short-term market sentiment. On Friday of last week, gold did trade lower and closed right at the 50-day moving average which is currently fixed at $1936.60. Today gold opened at $1931.90 and traded to a low of $1891.80 before recovering slightly. As of this writing gold is holding on barely to the key psychological level of $1900 per ounce. 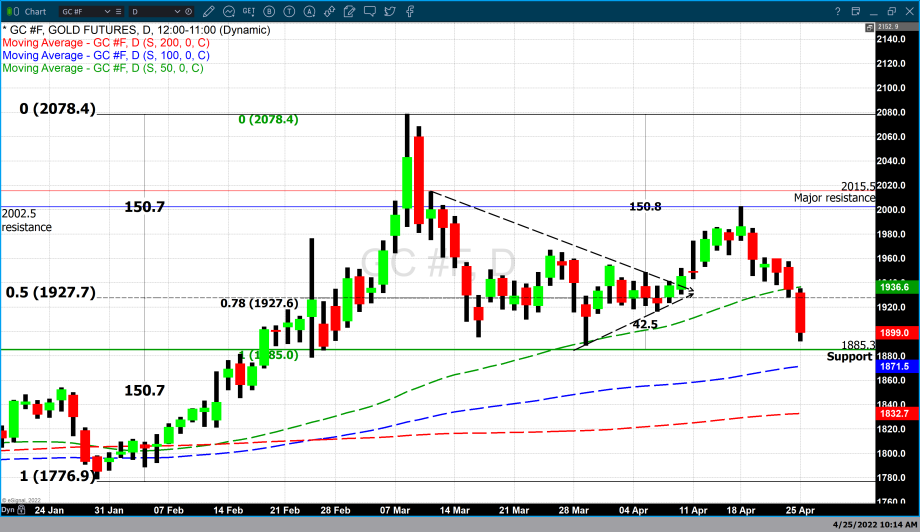 This all changed in February with two primary factors completely changing market sentiment to extremely bullish for gold. At the beginning of February genuine concerns about spiraling levels of inflation shaped the financial landscape. Market participants began to bid up the price of safe-haven assets such as gold in response to surging inflation. The Labor Department’s CPI (Consumer Price Index) inflation report for December 2021 came in at 7% year-over-year, 7.5% in January, and 7.9% in February. Currently, inflationary pressure continues to rise, with the latest CPI data for March indicating that the current level of inflation is now at 8.5% year-over-year with food, energy, and housing costs as the primary goods and services which continue to experience price increases.

Secondly, on February 24, Russia launched a major invasion of the sovereign country of Ukraine. Before February 24, Russia had amassed roughly 180,000 troops on its borders with Ukraine. On the dawn of the 24th, Russia moved its forces from three fronts into Ukraine. These two factors collectively took gold from the January lows of $1779 to just $10 below the record high of $2088. Gold traded to its highest value this year on March 8, when gold prices reached $2078 per ounce. The invasion of Ukraine has now turned into a major war between those two countries.