Recently Jerome Powell, Chairman of the Federal Reserve, said that “transitory has different meanings to different people.” I believe that their pledge to have “full transparency” has the same ambiguity with a lack of full clarity. Following the conclusion of every FOMC meeting, the Fed releases a written statement and the Chairman holds a press conference. However, in the case of the December FOMC statement and the following press conference, the Fed’s definition of transparency seems quite opaque.

It is true that many of the monetary policy components the Fed is deciding upon are discussed. But it is what is not said leaves much to be desired in terms of completely conveying upcoming monetary policy changes. There are also subtleties in words used to describe forthcoming adjustments, such as tapering their asset balance sheet, and the beginning of interest rate normalization. It is widely known that the Federal Reserve’s actions are data-driven and as that data changes so does the outlook of the Federal Reserve. However, there was no mention either in the statement or the press conference about winding down their assets accumulated on their balance sheet.

The minutes released yesterday told a much more complete story as they discussed an appropriate time to initiate balance sheet reduction. Before the recession that was a direct result of a global pandemic, the Federal Reserve began an aggressive quantitative easing program purchasing $120 billion of U.S. Treasuries and mortgage-backed securities every month.

During a recent press conference, a question was asked to the Chairman regarding the process of tapering and asset reduction. To paraphrase his answer, he said that once the process of tapering was complete, the balance sheet would remain whole and provide the needed liquidity to continue the economic recovery. The truth, however, is quite different as revealed in the minutes released yesterday, where they directly spoke about beginning to reduce its overall asset holdings. 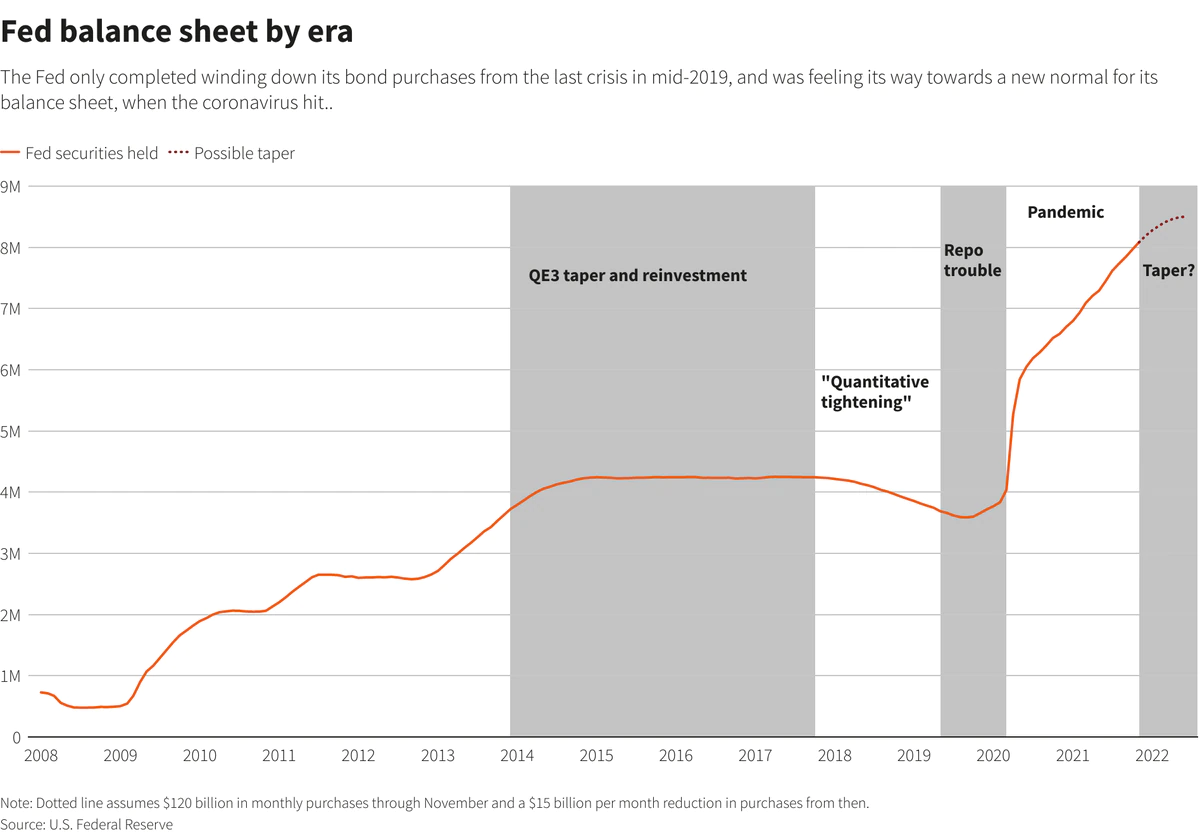 The chart above titled “Fed balance sheet by era” was created by Reuters news service using the Federal Reserve numbers. It shows that from 2008 to 2009, their assets were just under $1 trillion. To stimulate the economy Chairman Ben Bernanke who was nominated for that position in 2006, beginning his 14-year term, used an Orthodox method to stimulate and revitalize the economy called quantitative easing. Between November 2008 up until June 2010, the Fed created money by purchasing financial assets from banks and the government. The quantitative easing program was implemented in four stages, QE1 – QE4. By 2014 the Federal Reserve had amassed just under $4 trillion in assets. QE4 was the beginning of quantitative tightening, which attempted to reduce the trillions of dollars held by the Federal Reserve. However, the tightening process came with issues and ended in 2019. In the end, it had reduced their balance sheet from $4.5 trillion to $3.7 trillion. At that point, the Fed Chairman believed that further reductions would create economic difficulties, so the process of asset reduction was ended.

In the middle of 2019, the new Chairman of the Federal Reserve began its aggressive use of quantitative easing, taking the Federal Reserve balance sheet from $3.7 trillion to its current size of approximately $8.6 trillion. Yesterday’s minutes revealed the first time that the Federal Reserve publicly acknowledged that there would be a timeline to begin to reduce the assets. If history is any indication asset reductions by the Federal Reserve have intrinsic limitations and are a complex process to complete without having detrimental effects on the economic recovery. 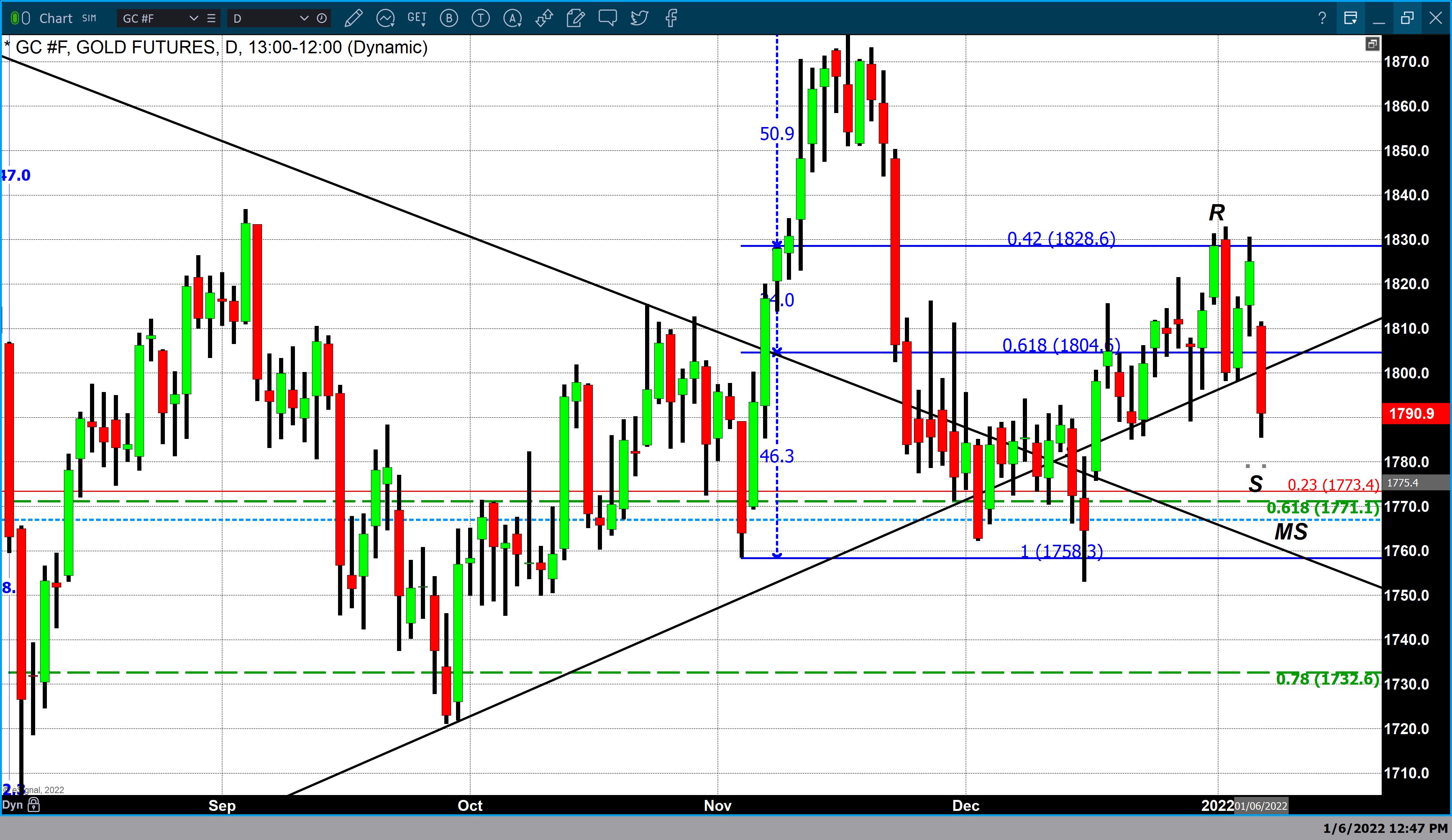 It was this additional component that took market participants by surprise resulting in strong declines in U.S. equities and gold. As of 5:30 PM EST gold futures basis, the most active February 2022 contract is down $32.40 and fixed at $1790.90. While tomorrow’s jobs report could certainly have a dramatic effect on various asset classes, it will be this month’s FOMC in which market participants will demand more clarity and transparency on the intent of the Federal Reserve as it pertains to reducing the Federal Reserve’s massive asset balance sheet.