A volatile day for gold, but tomorrow’s Jobs report could cause that to continue

Dollar weakness provided strong tailwinds today, but bearish market sentiment neutralized any price gain. The net result was a mild downtick in gold futures and only a fractional decline in Spot or Forex gold. Spot gold is currently fixed at $1806.20, a decline of only $0.20. According to the KGX (Kitco Gold Index), selling pressure resulted in a loss of $11.90 with dollar weakness softening the decline by $11.70.

Gold had a volatile trading day, trading to a low of $1788.50 before recovering the vast majority of today’s price decline at its lows as market participants stepped in to buy the dip as they perceived the decline as an opportunity under the assumption that today’s price decline resulted in gold being oversold. Traders quickly took gold back above $1800. 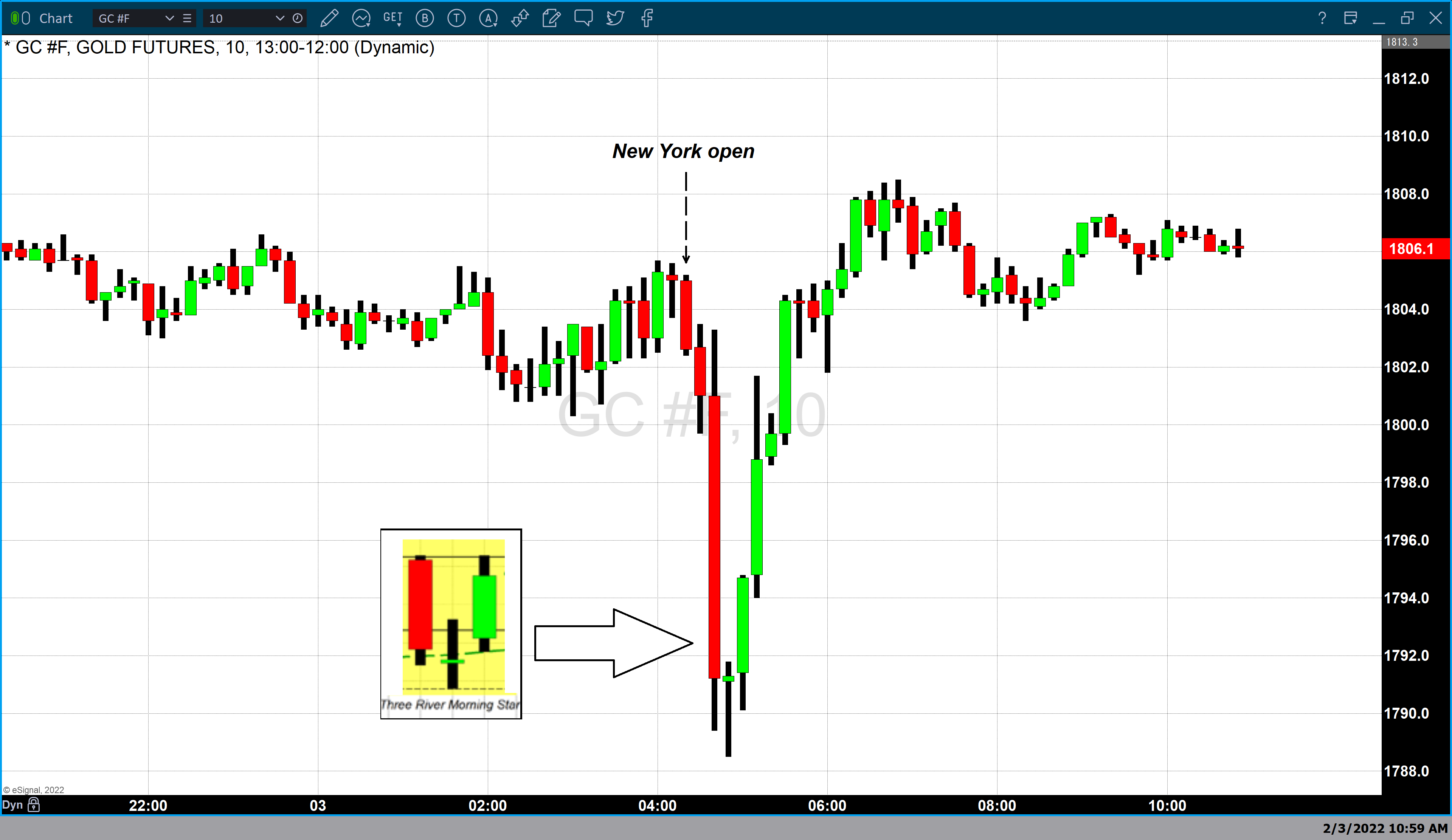 Chart number one is a 10-minute candlestick chart marking the opening of gold trading in New York. The selling pressure occurred over the first 30 minutes of trading with gold opening at $1807.40. Gold traded to its low 35 minutes after the open in New York ($1788.50) and would regain the vast majority of the price decline in the following hour.

Typically used for daily candlestick’s, a Japanese candlestick pattern called a “three river morning star” formed in the 10-minute chart. This three-candlestick pattern occurs after a defined downtrend. The first candle is a long red candle (created when the closing price falls below the opening price of that candle). The second candle is a “Doji” candle with the “real body” (created from the open and closing price not far apart), falling below the close of the red candle. The final candle is a long green candle (created when the closing price is above the opening price of that candle) beginning above the previous “Doji”. This pattern can be a solid indicator that a “key reversal” of price is occurring.

One possible explanation for the rapid recovery of gold this morning was concern about the outcome of tomorrow’s jobs report. Yesterday ADP released its private-sector jobs report for January. A poll of economists by the Wall Street Journal predicted that 200,000 jobs would be added last month. However, the actual numbers were much more dire revealing that 301,000 less jobs now exist. The ADP report brought into question the current forecasts for the Labor Department’s nonfarm payroll jobs report which will be released at 8:30 EST tomorrow. Estimates by economists polled by Dow Jones predict the report will show a net gain of 150,000 jobs. However, many economists are adjusting their forecasts to account for yesterday’s dire news. According to CNBC, some economists expect “big losses - as largest 400,000”.

Reuters reported that Extinity analyst Han Tan believes that, “Gold could see a lift from a subdued U.S. jobs report, forcing markets to rethink how aggressive the Fed needs to be to tame inflation”.

Unquestionably, if tomorrow’s jobs report also indicates a massive loss of jobs, one thing is certain; gold pricing could become very volatile following the release of the jobs report tomorrow.