Questions arise about next FOMC meeting; will their decisions remain data-dependent

Market Committee meeting for the calendar year 2023. But before Federal Reserve officials meet for the first time this year on Friday, January 27 the government will release its latest data on inflation vis-à-vis the core PCE for December. Currently, the forecast for this week’s core PCE report is that inflationary pressures will continue to subside from 4.7% YoY in November to 4.4% in December 2022. 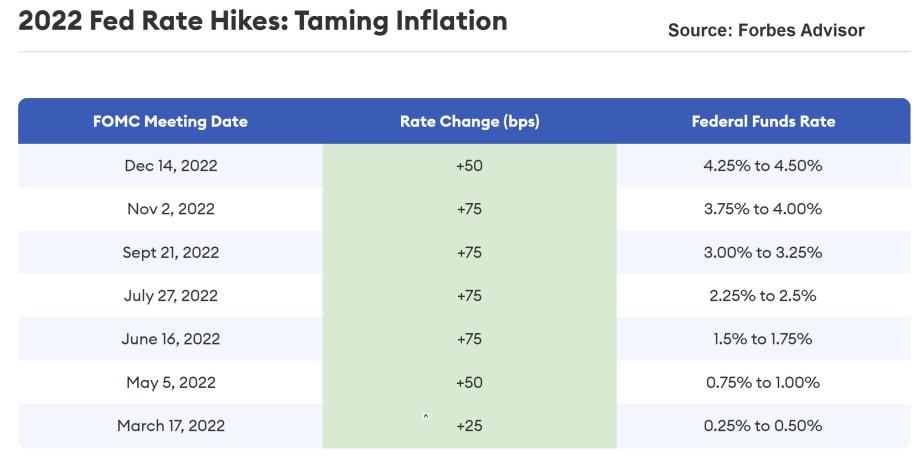 This was followed by a series of aggressive rate hikes that would define the second half of 2022. The Federal Reserve as they raised rates at each consecutive FOMC meeting from March to December. In May they raised rates by ½% and followed that with a series of ¾% rate hikes in June, July, September, and November. Finally, the Federal Reserve decreased the pace of hikes starting on December 2 by only raising them by ½ %. The totality of the actions by the Federal Reserve last year took the benchmark rate from between 0 and ¼% to between 4 ¼% and 4.5%.

It is widely expected that the Federal Reserve will continue its pivot by slowing the pace of rate hikes with a ¼% rate hike during the January FOMC meeting. The CME’s FedWatch tool currently is forecasting that there is a 98.1% probability that the Fed will raise rates by only ¼% and a 1.9% probability that the Fed will raise rates by ½ %. The Federal Reserve is also on record according to their most recent economic projections released in December of last year that they expect to take their benchmark rate just above 5% and not reduce that level for the entire year and possibly into the first or second quarter 0f 2024.

This raises many questions, the most important being whether or not the Federal Reserve will maintain this aggressive monetary stance in light of recent data that indicates that inflation in the US and globally has peaked and is decreasing every month. Global inflation came in at a six-month low in December but the Federal Reserve maintains that it is unlikely to reverse its hawkish bias.

Their hardline stance that they will keep rates elevated at 5% with no rate reduction in 2023 brings to question whether or not the Federal Reserve is still data dependent, and if they are will they maintain their rigid policy of no rate deductions this year regardless of what the data shows?

While declining levels of inflation allude that the hawkish monetary policy of the Fed with aggressive rate hikes is certainly behind us. The fact that the Federal Reserve is on record stating that they will slow the pace of rate hikes the question becomes; is there any point at which positive data on lower levels of inflation will cause them to backpedal on their stance of no rate reductions in 2023?